~from Episode V. of The Aqueous Transmission by MIKE EYE

“Here — Lina. Watch this, I caught everything that just happened to you all on video! … Now, let me just rewind to the beginning… okay, here, hun. Watch this recording.”

Lina peered into an opening of Amrita’s belly area that now displayed a small screen depicting colorful recorded digital media in playback, with small stereo speakers on either side. In the video, Lina watched herself taken aback by the hands slowly emerging from the pond.

“Yea, I remember this,” said the Mother.

As the Mother started to watch herself be put under a deep enigmatic spell, she saw herself inch, bit by bit, back toward the pond from which she had sought to spring from, and sit back at the Water’s edge as the old man slowly arose from the depths. Just as his Head had fully emerged, arms still raised sky high, the old man froze dead-still, all-Eyes on Mandorla. And there he remained for several minutes.

From the recorded video, Lina was unable to see any orbs radiating from the old man’s Eyes — not that she would have remembered them anyhow — and so was able to see the upper part of the old man’s face. She observed the old frown and noticed that he was starting to cry as he remained there, half-submerged in the pond, naked and hairy with arms still eerily raised sky-high, his gaze fixed on Amrita.

Glaring into Amrita’s display in wonder, Lina shifted sights from the old man to her own digital representation and noticed her body still in a deep hypnotic trance state. Another tear trickled down the man’s face as he sobbed on.

“No, but he looks so much older here…” persisted Lina quietly to herself.

Then, in the video, Lina saw the sky open up with a loud clap and thereon promptly proceeded to pour down profound precipitation profusely.

Remaining halfway submerged in the pond, the old man shifted his gaze upward at the dark rain cloud, his arms still raised up high, his face unflinched, Eyes remaining fully opened as rain flushed through his teary Eye sockets.

“IT IS I, LACHRYLON,” announced a rumbling, commanding voice from above, “I am proud of you, old man. Your efforts to project our sacrifice, Fletcher Munsin, into Bry Dellows has proved worthy.”

The old man smiled. It continued to downpour in buckets, and he still stared skyward unflinched, keeping up a steady sob.

“Your mission to hold his form during the Conception of Mandorla at the Andromeda Biodome was a success, as you can see” boomed the voice.

The old man returned his glance back down at Mandorla, a slight smile upon his face.

There was brief silence.

And then, Lachrylon suddenly bellowed its first command: “AND NOW, COMMENCE THIS AQUEOUS TRANSMISSION!!!”

A huge flash of lightening bolted down upon this Fucked-Earth’s desert beside the newborn silent atrocity. And by the time the subsequent clap of thunder sounded, the part of space exactly in between the old man and the young baby had gradually lit up a small wavering dot of floating blue fire in mid-air. The old man took a bow with his torso from within the pond and initiated a most intense moment of meditation. 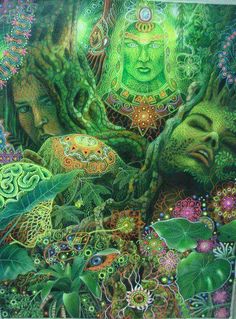 Unbelievably, the body parts of both the man and the baby slowly liquefied, piece by piece, into fluid form, from Head to toe, toward this floating, rapidly-turning-indigo flame in between them that grew larger and larger with each added component from either side. There remained a torrential downpour.

Once both bodies had been fully pulled into the floating indigo flame, they then reappeared into physical form in the very same locations, but with places exchanged.

With the poor infant now sloppily bobbing up and down in the mystical pond, heedless as all Hell, the old man scurried over, and took a hard glance at her with an utmost seriousness. With tears streaming down his cheeks, the man mumbled a terse mantra repeatedly as he proceeded to grab Mandorla’s Head with both hands and slowly push her under.

Mother Magdalena was in complete and utter shock as she witnessed this footage upon Amrita’s abdominal display, both hands covering a completely dropped mouth.

The old man held the putrid, pig-like baby Underwater for several minutes, then looked back up at the mystical dark rain cloud as if awaiting a reply.

“HUMANITY SUSTAINED,” proclaimed the loud, deep voice from above.

Lachrylon then went on to state commands to the old man, rainwater continuing to pour down harshly, and the man listened, Head up High, to the orders given him.

“Now, as you know, you and your brothers must remain in Bry Dellows, in full physical form. That is Rule One.”

The man was staring straight up, keeping his teary Eyes wide open, his big beard getting soaked, the rain pouring down upon his face. He nodded.

“Rule Number Two:” proclaimed Lachrylon from on High, “always remember to only tantrically co-conceive other human-hybrid beings by intentionally making true Love to those cursed women within your Bloodline — those dirty women who only look clean, with their discreet intentions to procreate. If this becomes impossible, seek Separation immediately, and, at all costs, do not allow the Hankerhawks to gain access to your Sacred Sperm.”

The old man nodded slightly, his Head still directed straight up at the sky.

The power of Lachrylon forged a great, long hemp-woven robe out of thin air and instructed the man to put it on. The man nodded and obliged. A huge bolt of lightening cracked down from the sky in near proximity.

“Have fun, old man! Enjoy this glorious miracle of life on Earth again for as long as you can before the next rapture! And know this: just as much as your own Mother from Sirius B, I LOVE YOU!”

And with those last words from the mighty Lachrylon, the roll of thunder following the previous huge lightening strike made its mark, and the man laid his Head down into the lap and grasp of Mother Magdalena, who was still motionless in a deep trance by the edge of the pond.

With one more gigantic bolt of lightening striking the mystical pond, the barren landscape then commenced drying up promptly, the pond fastly drying up, and everything was completely dry by the time the resulting rumble of thunder clapped in the sky. The dark rainclouds abruptly diffused into the brightening atmosphere.

The mysterious pond had completely vanished, with the little body of Mandorla and all. The mood was once again altered drastically.

The bright Sun now lit up everything most vibrantly. There were no clouds to be seen in the sky. The subtle hazy glow from the crimson Harvest Moon still also remained up in the sky, in chorus with the Sun.

Staring in bewilderment at this scene through Amrita’s digital display, the Mother watched herself drop the old man’s Head and jump up, terrified at finding him in her arms instead of Mandorla.

“… Aaand that’s where you came to,” announced Rita, pausing the video.

The bot was surprised to not hear any type of reaction from the Mother, but then realized why it hadn’t after glancing over at her.

Magdalena had collapsed down upon the dirty desert floor, hitting her Head hard, having fainted from witnessing what had just happened to her during the mesmerizing hypnosis. -MIKE EYE ⊙

Like Loading...
‹ What is “Visionary Fiction”?
Current Events: “What’s in a name?” High-jacking the power of words & associations, by MIKE EYE ›

What We do, hear or write .. Always take the Positive Side. If we always take the Negative Side, will always feel less and never be Satisfied. Better A Lot, understand. Rather than A Little, misunderstand/misinterpret. Therefore, do anything on the Aesthetic Goal itself .. It will lead us to Tranquility & Peace naturelover peacelover ☺🌿 VA