Home › America › Eye Release the Prologue to the sequel of The Aqueous Transmission, currently in the works….

Eye Release the Prologue to the sequel of The Aqueous Transmission, currently in the works…. 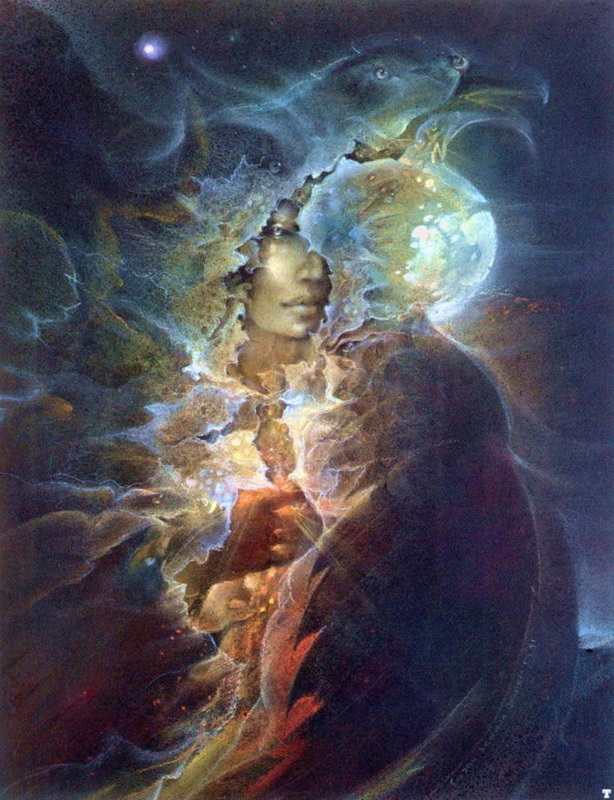 The huge dolphin creature swam easily into place over the subtley marked ocean floor clutching the Solaria Seed in earnest and instantly disappeared. He shot at lightspeed through hyperspace for a few seconds, shimmering spirals spinning about him, and came out the other side as a human, in a small dry room. He glanced down at the large glowing seed in his hands and smiled before heading down a few steps to a small control panel, his dark robes fluttering about him. He was no longer in the Sirius Sector of the galaxy.

Having momentarily set the Seed aside, the old man typed incessantly away at the console for a time, updating his latest achievements into the computer’s hard drive. Then he went to go relieve himself in the bunker’s restroom to literally piss away the lag of interstellar travel his body was feeling.

Without a moment’s hesitation, the mystic walked up another short flight of stairs at the far end of the main room, grabbed the handle of the door that was at the top of it, and pushed it open, stepping out into woodland that was remarkably well lit for how thickly settled it was, an enigmatic Sun shining brightly through the boughs that criss-crossed overhead. Without a pause, the old man headed out eagerly with a slight grin on his face, both his hands carefully clutching the Solaria Seed.

He headed down a gentle path that blazed brightly through the exuberant jungle environment, a euphoric warmth embracing him from all corners all the while. His Head felt happy and he bore a growing smile across his face as he eagerly made his way through birdsong and gentle breezes to the rejuvenating Inner Earth Pond, the very body of water the Mother and her pet would visit exactly every 28 days from their heinous home on Surface Earth. The mystic, being a Sirian dolphin with high vitality needed not the Pond, of which was called Breña, to rejuvenate himself as Mother Magdalena did; he used the Pond for something different. Inner Earth was a realm warded by Amrita, the Mother’s pet. The mystic was on his way now to his realm, a world looked after by the old man himself— a divine version of a most pristine Earth in perfect harmony, existing outside the Time Continuum, and thus not in any stellar precession. And the entrance to his world was at the Bottom of Breña.

It was not long before the mystic could smell the familiar little body of water in the near distance and his step picked up pace upon sight of it, approaching with increased emphasis as he neared the Pond. Retiring his robes to the side, the old man, buck naked and hairy, tucked the Solaria Seed tightly against himself and dove into Breña. He swam a short ways to the bottom of the sacred waters where there was yet another underwater Stargate that he must pass through.

Surfacing at the Pond beside his thinking spot within the mystic’s Immortal Earth Southpole Homeland, the old man made haste toward the familiar grassy knoll of where he would sit and contemplate. Beside the knoll, standing taller than all the other trees around it, was a grand old hickory whose giant stump hugged a partially embedded Sirian Space Crystal the old man had kept there for this very purpose. He pulled a fast jog over to the tall tree, coming to a halt before the stump. He paused briefly, glaring inquisitively into the Sirian Space Crystal that glittered with an uncanny brightness. Then slowly, carefully, the man gently placed the glowing Solaria Seed inside the breadth of the glittering crystal and a very high-pitched noise sounded as a fiery ball of light lit the Seed up, haloing around it, blinding rays exuding outwards from it in slow pulses. The old man’s abdomen fastly warmed itself into a comforting hearth of some spiritual High campfire, and a smile spread across his face. Here he would let the Seed incubate for the time being.

He Headed back toward the Pond, mindfully bypassing his favorite grassy knoll of contemplation. As much as he wanted to sit and contemplate, he told himself, he now had more pressing issues to tackle due to the Seed coming into union with the Immortal Earth Southpole Homeland, a place he had created. He meditated his posture briefly, mindfully marking his passage in the undergrowth of his Homeland, took a round of heavy breaths of fresh air, then slipped back into the Pond. He would return here someday, he reminded himself. But not for a long while. He swam to the Bottom and took the Stargate back to Inner Earth. ~[MIKE EYE]

Like Loading...
‹ Endangering All Americans Suffering From Mental Distress
SNEEK PEEK Chapter 1 SEQUEL To The Aqueous Transmission by MIKE EYE ›

A myriad of eclectic writings.